A. A monk asked Seijo, “Daitsu Chisho Buddha practiced Zen meditation for ten kalpas in a Meditation Hall but could not attain Buddhadood (enlightenment) because the true Self didn’t appear before him. Why was this?” Seijo said, “Your question is a very appropriate one!” The monk asked again, “Why couldn’t he attain Buddhahood in spite of such a long Zen meditation in the Meditation Hall?” Seijo replied, “Because he could not.”

Student: “Why did Seijo say, ‘Your question is a very appropriate one’ about his student’s question?”

Master: “Because the student was telling the truth.”

Master: “Because he didn’t do wrong.”

All Sutras are only Mara’s talk to him who doesn’t recognise his own Dharma talk.

Even Mara’s talk is a Dharma talk to him who knows what he himself says.

It was because Daitsus Chisho Buddha couldn’t attain Buddhahood that he was admired.

He would have become a laughingstock if he had attained Buddhahood.

A. Master: “Because both are from the same source.

A. Master: “I would avoid it by entering an old shelter.”

Fish don’t think that they are wet.

Master: “Its bottom is invisible.”

It is too deep to see the bottom of it.

It will quench your thirst forever if you drink it.

A. Water represents our illusions. ‘Walking on the water’ symbolises ‘living free from the trap of illusions’, that is, Jesus didn’t sink in illusions, which means he was not fooled by them. The scenario that they were fishing in the water is symbolising our life that we are leading in illusions. The fact that Peter started walking on the water to Jesus means that he had a strong faith in Jesus and believed the water to be an illusion, even though he didn’t realise the truth himself. The scene, where noticing the strong wind, Peter was afraid and started to sink down in the water means that he didn’t realise the wind was also an illusion because he was not enlightened.

Commentary:
Why do you see only water when the master says, ‘Milk’?
Look and listen the other way around.

A. Who could say, “No”? However, the fact is that no one knows how long it will take. Be determined but don’t be impatient. Impatience can cause attachment, which can raise side effects. The harder you try to reach it, when you are impatient, the farther you can get away from it. Watering a flowering plant twice as much as usual doesn’t make it grow and bloom twice as fast as usual; rather it can damage its root. Likewise, a hen, however hard it incubates its eggs, can’t shorten the period of incubation and move the hatching time a few days forward. You should be patient enough to wait for the time to grow ripe. If you get lost in your practice, you will reach the stage where you become indifferent even to the final goal. That is a sign of your being close to the final goal. 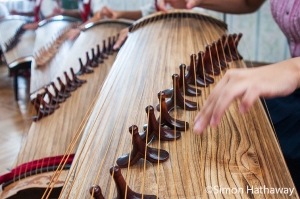 If you tune the string of a violin too loosely, it doesn’t make a sound.
If you tune it too tightly, it breaks.
Only when you tune it properly does it make a beautiful sound.